In its recent March/April issue, Fraud Magazine speaks with veteran CFEs Ján Lalka in the Czech Republic, Jonathan T. Marks in the U.S., and Sean McAuley in Scotland about how fraud examiners can help organizations develop secure, workable whistleblowing programs. This article explains why they're essential and, in some cases, a matter of life and death. 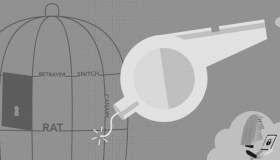